Mr. T. H. Colebourn first started in the radio business in 1924 shortly after the start of public service broadcasting and manufactured "wireless sets" under the brand name of Cleartone. It all started when as a boy he learned the Morse code in the scouts. Later, after his experiences in the Royal Signals during the First World War, he was convinced that the newly introduced BBC national radio service had to be the way of home entertainment in the future. Most people thought it was just a gimmick and would never replace the gramophone!

Radio was also his hobby. He set up his own amateur radio transmitter and was one of the few radio "hams". He certainly was the first in the Isle of Man. His call sign was G2IA.

T. H. Colebourn Ltd became incorporated as a limited Company in 1933. Subsequently though his acquaintance with a Mr. Frank Murphy, became the sole island dealer for Murphy radio receivers. This brand was regarded as the most advanced at that time.

Our story is a long one but some of the landmarks in Colebourn’s history since WW2 were:

As a Company we have always been the first with new and innovative technology, and for all the products we sell today, we still provide the best island wide backup service, as we have done since October 6th, 1924.

Opposite HSBC Bank at the top of Victoria Street.

Anywhere in the Isle of Man. 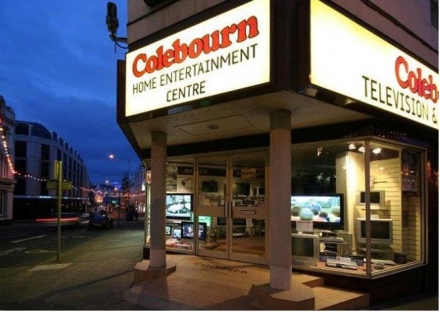