60 years in hardware, Staines celebrated its first diamond jubilee (60 years) in business in 2014. Senior directors of Staines & Brights Limited, Raymond and Bronwen Willis took over the ownership and operation of a small, but well-established Ironmongers store from Mr Walter Staines upon the occasion of his retirement on April 1, 1954. The business, known for many years as W. Staines, was first established in Station Road Tiptree and subsequently relocated to its present position 81 Church Road, after being bombed in 1941.

The Willis family quickly took up the challenge of expanding the business to meet the demands of a rapidly expanding village. The shop originally occupied the front rooms of their small bungalow. The domestic living area, to the rear of the building, and the garage were quickly converted into sales space. Today the store covers the whole area of the property with over 8,500 sq. ft. of sales floor. Initially the shop continued with traditional ironmongery and hardware business supplying locals with the basic wares of tools, screws, nails, timber, paint, and cement.

Over the years the evolution of Staines into what is today a comprehensively stocked, home and garden store, often leading the trends in stock diversity now seen elsewhere at DIY superstores, with whom the business still vigorously competes. The winter evening paraffin delivery rounds undertaken during the 1950's and early 1960's gave way to bottled gas delivery in the 1970's. Loose wire nails, ironmongery and hardware previously sold by the pound are now all pre-packed. Simple ironstone crockery (still stocked) has been joined by fine porcelain. Greetings cards and party balloons, jewellery and quality gifts appeared on the stock list in the 1970's. A dedicated gardening department and seasonal plant sales have long met the demands of local horticulturalists. Plumbing materials and bathroom equipment together with window blinds and curtain tracks have space in store; thousands of choices of hues and tints of paint and emulsion via computerised mixing stands join a vast selection of other decorating requisites.

The deliveries of cement dust hot from Thames side kilns, stocked to meet the needs of the 1960's construction boom in the village, have given way to handy bags of sand and cement now occasionally required for a small DIY projects. The store converted to a self-service operation during the early 1970's, which lead somewhat strangely, to a growth in staff numbers. Today there are often ten staff on hand ready to assist the customer find their way around one of Tiptree's favourite shops. In 1985 the directors acquired the business and lease of Brights, an electrical appliance retailer in the premises of Tiptree's former cinema, the Astoria. The family business partnership has recently further evolved by becoming a Limited company, preparing the way forward to the next fifty years in business.

You can now shop with us online where you can find a range of great products from DIY tools to electric razors, from lcd tv to teddy bears. So, for great gift ideas for all the family shop on this site.

We are located in the centre of Tiptree, opposite Tescos with Free on site parking.

Areas outside of these may incur a small delivery charge. Call 01621 815314 if you can't see where you live listed. We will be happy to help.

We offer free several levels of installation from 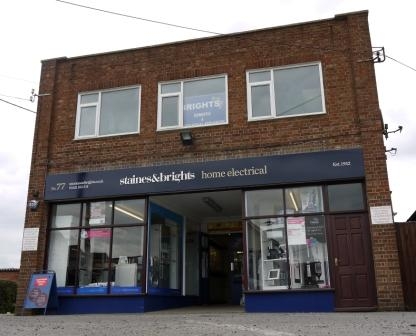