Back in the 1920's Robert Robertson came down from a Scottish Company to install a new Windmill in Eastwood Road Bramley. During his installation he found an urgent need for someone to charge accumulators. In 1926 he set up R A Robertson opposite Bramley Bedroom Centre in the grounds of East Manor Cottages where he charged accumulators. Customers would leave their batteries as they are called today and take another one home The business was a great success but needed larger premises so a new site was found in the old highway maintenance yard today known as Windrush Close. The business continued to grow and in 1937 took over three shops in Bramley High Street.

Mr Leonard Robertson was now involved in the business and became more involved with the electrical side whilst his father ran the grocery side of the business as well as delivering fresh fish. Radio sales increased and in the 1950 with the introduction of Television the demand far exceeded the availability. Brands Bush, Murphy and Crossor were now producing as many Televisions as they could but Mr Robertson could not keep up with the demand many customers willing to pay over the price in order to get further up the list. Reliability was not very good with tubes often failing and the manufactures only giving a 3 month guarantee, so rental was very popular. In 1961 land was purchased further up Bramley High Street and a new shop was built specially for the electrical side 2 workshops one for televisions and the other for domestic repairs (kettles and toasters etc.) After the death of his father in 1964 Mr Leonard Robertson took over the business expanding the television rental business and taking on new manufacturers such as Miele in 1964 and Sony in 1970. Today the business is still in family hands With John Robertson Looking after the electricians and Graham Robertson responsible for the domestic side of the business. The business is very different today from all those years ago but you still get good service with a smile. 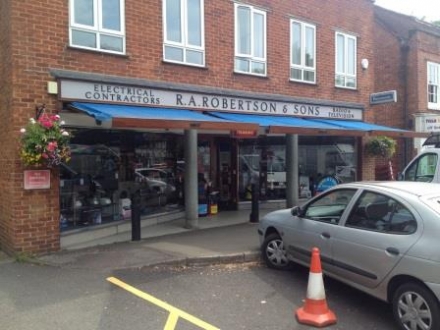 Today this store will be open until:
5:30 PM