Pennine Plus formed over 40 years ago in the summer of 1971. Our original trading name was ESC TV. This name was appropriate at the time as we started life as 'Electric Shaver Clinic' serving the local area. TV was added to the name later as we began renting and repairing 'the good old fashioned' Black and White TV's.

In 1985 a whole new television experience was born. This involved pan European and 'Sky' television pictures being transmitted from a satellite to a small dish, instead of an aerial. Pennine Plus was uniquely placed to provide 'Pace Satellite Products' based in Saltaire, with help and support to develop its business model to fulfil the ever growing 'Sky' satellite box requirement, in fact, some 20 years later, Pennine was awarded the industries top accolade, and in 2007 was awarded the regional and national 'Sky installer' of the year award. We then evolved over time to offer the full one stop shop experience for all domestic electrical and Gas needs.

Pennine Plus, a name you can depend on!

Now supplying and installing major products, commercially, locally and throughout the north of England. 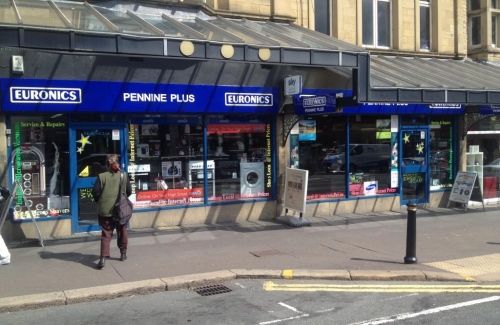