Pearsons TV & Appliances was established in 1978. We are a family run local business based on the edge of the North Yorkshire Moors, eight miles from Middlesbrough, in the market town of Stokesley.

We mainly deal with Panasonic, Hotpoint, Bosch, Belling, Samsung, Hoover, and Dyson products and as a member of Euronics (Europe's biggest Independent Electrical buying group), we are able to offer our customers a wider choice of products at competitive prices.

Why not visit our showroom and view our extensive range of products on offer, including Bosch Kitchen Appliances, Panasonic and Samsung LCD & Plasma Televisions and Dyson Floor Care, all at competitive prices.

We also offer free local delivery and have a comprehensive workshop and repairs department (we now repair GHD hair straighteners).

Pearson’s TV and electrical was established in 1978 by Mr Kevin Pearson, his first shop was situated on the lower part of Great Ayton High Street.

Kevin started business with 4 colour televisions which he rented out. He soon established a trading account with National Panasonic, who are still our biggest supplier to date.

A year later a second shop was opened at our current location in Stokesley High Street in 1979. The rental business thrived at the time as televisions were relatively expensive and he soon had over 200 rental accounts. This was a great foundation to build on as rental customers appreciated our efficient and friendly local service, most still use us to this date.

During the mid-1980's the Ayton shop was closed and all our efforts were concentrated on the larger Stokesley shop, a video rental library was opened, a TV repair workshop was expanded and Pearson's began to sell 'white goods' (refrigeration, cooking and laundry appliances). By the mid 1990's out of town retail parks began to appear and various supermarkets began to sell bottom end electrical goods. This coupled with a dramatic fall in the retail value of television prompted Kevin to move away from rentals and make his smartest business move to date, Euronics! Euronics is Europe's biggest buying group giving each High Street independent a similar buying power to the big multiple outlets. This means we have access to many more brands and appliances which we can sell at competitive prices whilst still retaining a high level of after sales service.

In 2003 Kevin was diagnosed with terminal cancer, Kevin's son, Mark, sold his Satellite and Aerial Installation business and happily took on the challenge of managing the Electrical Shop. Mark has expanded the showroom and given the interior a face lift to suit the change in television. As manufacturers changed to flat panel LCD and Plasma Televisions. Mark continues to offer the same level of service that Pearson’s customers have been accustomed to for the last 30 years.

Sadly, in September 2005, Kevin lost his 18-month battle with cancer which was bravely fought until the end. His presence and good nature will always be missed.

In the following years Mark expanding the showroom further allowing them to stock an even wider range.  Particularly small domestic appliances including irons, kettles, and toasters, also holding stock of, and displaying built in kitchen appliances.

2012 was a huge year for Pearson's with Euro12, the London Olympics and the Digital changeover happening consecutively. Luckily, Pearson's customers were able to draw on the wealth of knowledge that their staff have acquired over the last 30 years to help them though a challenging time.

As challenging as it was in the week of switchover staff worked hard to get though over 500 field calls in 3 days!!!! Yet another example of the level of customer service you can expect as a Pearson's TV & Electrical customer.

“I would like to take this opportunity to thank all our customers both old and new for supporting us over my first 10 years in the family business. Without you Pearson's would not exist as it does today. Some of the last few years have not been very easy, but by maintaining our high level of customer service and keeping our prices as competitive as we can, we have managed to outlast many large websites and out of town retailers who have gone into administration. We look forward to working with you in the future and helping you whenever we can. That is what we do best.”

Many Thanks, Mark Pearson Proprietor

From the high street follow the signs to Stokesley School, go past the school on your left for half a mile then turn left into the terry dicken ind est and you should see us on the left hand side. Phone 01642 711301 if you struggle and we will guide you in. 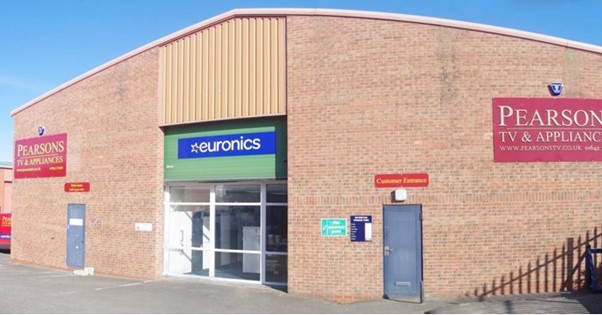