We also have a service department where we repair most popular makes of Televisions/Videos and other electrical items (providing the parts are available).

If an item is not in stock, we will do our best to order for you as quickly as possible and at a competitive price!

In 1938 John Calvert purchased a property on South Terrace, Seaham, adjacent to what was then the Empire Theatre. The main service offered was the charging of accumulator batteries which were used to power the early radio receivers. Mr Calvert then used a horse and cart as the transport for collecting and delivering back to the customers their fully charged batteries. As more and more people wanted radios it was decided to start selling and repairing them and this was the start of the business as people know it today. In the 1950's, Mr Calvert recognised the potential market in Television Rental. He would buy 50 sets at a time, prompting sales reps to question his judgment, as it was quite a gamble in a market that was in its infancy. The gamble paid off, as Mr Calvert became one of the first in the country to take the enterprising step into the Television Rental market.

Mr Calvert also had an electrical contracting part of the business doing house wiring and the wiring of new estates that were being built all over the north east of England at that time. This part of the business was managed by his younger brother Walter Calvert. In 1953, the business became a Limited Company, and the name of John Calvert (Electrical) Ltd became almost a household name in Seaham and the surrounding area. The company then and still does occupy the premises at 60 Church St. Seaham. At this time, the shop was managed by Mr. Calvert's brother-in-law Joe Grieves. In the mid 1960's another shop was bought at the top of Church Street known as Rubens who sold toys and fancy goods as well as having a number of rented TV's. This shop was closed later in the 60's and the rented sets were then serviced by the staff at 60 Church St. In 1970 Roy Neville, the son-in-law of Mr. Calvert joined the company as Managing Director and took over the administrative running of the company.

Also, in the early 70's number 61 Church St. was bought which meant the size of the shop could be doubled and a new workshop was built at the rear of the shop. A few years later number 62 Church St. was bought but left untouched until the early 1990's. At this time there was a major refurbishment where the shop was completely changed with extra space for both storage and sales and is the layout that it is now. In 1999 unfortunately Mr. Calvert died, and Roy Neville took over the complete running of the business and did this until he retired in October 2004. At this time John Calvert (Mr. Calvert's son) took over from Mr Neville and became the new managing director.

The Sunderland branch of John Calvert Electricals is situated on Sea Road at Fulwell, a vibrant street with shops for all tastes.

With free parking available at the side of our store, or bus numbers 18, 99 and E2 stopping right at our door, you should have no problems reaching us for all your appliance needs.

With 3 stores in Sunderland, Seaham and South Shields we deliver to a large area of the North East.

we can often deliver even further. Please check with staff for details. 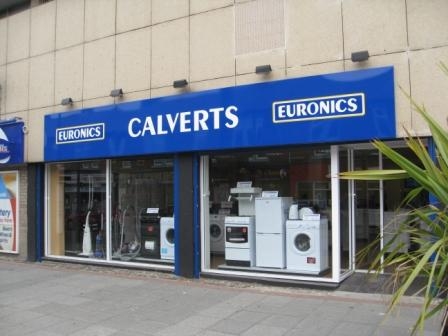