Welcome to Donald’s (or Doddies) as any native of Peterhead will tell you. We are a family owned and run department store in Peterhead, offering value and service to Peterhead Fraserburgh and the surrounding area for over fifty years.

Started by George Donald in the thirties as a drapery and haberdashery wholesaler the business continued as a wholesaler increasing its ranges to include workwear, footwear, and floorcoverings.

By the mid-sixties when George passed away his two sons George & Leslie were running the business which by now had expanded it to many other areas and eventually the "Warehouse" became a proper shop including a furniture department run by George's elder daughter Hilda and Our first venture into Electrical retailing run by another of the founder daughters Ella.

Today Donald’s operates 8 different stores including 3 intersport branded sports/fashion stores looked after by George the founder's grandson and his son Steven assisted by Carole another granddaughter.

Leslie who is well into his seventies still plays a major role in the administration of the group assisted by his daughter Ann. Leslie's son Derek oversees the Electrical and homewares departments.

Our electrical offering is spread across many major brands and a wide variety of products from flat panel TV and new 3D Blu-ray technology to all manner of kitchen and household appliances.

Follow the South Road until you reach your next roundabout and take the 3rd exit onto Kirk Street.

Take a right at Maiden Street (at the church) and follow down that road which then turns into St Andrews Street.  You will pass the Waverly Hotel & Bar on your left and we are located on the right-hand side at the corner of St Andrews St. and Jamaica Street.

There is limited parking across the street behind our Furniture Shop, a car park towards the left heading into town or there is on-street parking available.

We provide free delivery in the North East of Scotland within 40 miles of Peterhead. Areas include Peterhead, Fraserburgh, Mintlaw and all surrounding villages.

Delivery Charges may apply for outside of these designated areas. 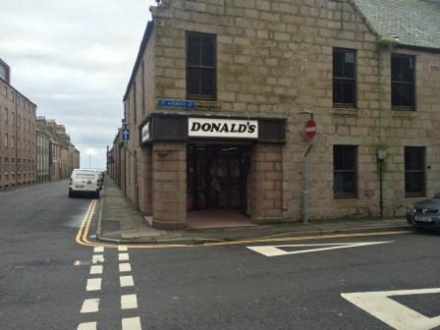