Established in 1970, DAC Appliances is one of County Tyrone's foremost electrical goods store, stocking a wide range of home entertainment systems and other electrical items, including cookers, dishwashers, washing machines and vacuum cleaners. DAC is firmly at the forefront of electronic supplies and its one–to -one customer service cannot be rivalled in Tyrone. DAC also stocks a wide range of smaller appliances from toasters to kettles, etc.

Originally opened in Omagh in March 1970 by Charlie McEldowney, the business may have started small, but has expanded greatly over the intervening years, opening a second store in Cooks town in the early 70's and moving to larger premises in Omagh in 2002.

DAC is very much a family run business catering to the needs of the local community, with Charlie having been joined by his son mark, and his daughter Carla. Reflecting on his success over the decades, Mr McEldowney quipped: “to survive the 45 years is not so bad!".

The company’s top priority has, and will continue to be, the local communities of the area it serves. Mr McEldowney prides himself on his professional team of polite and efficient staff recruited locally from servicemen, spare parts technicians, and sales assistants, providing first class service at low prices.

DAC Appliances occupy spacious premises on the Dublin Road, one of the main routes into Omagh.  Besides being in the town centre, we also have the added advantage of having on-site parking for up to 15-20 vehicles. Our staff will provide you with a friendly welcome and advice when making a purchase from our store.

With stores in Omagh and Cooks town, DAC Appliances have been catering to the electronics needs of the people of the county and further beyond for the past four decades. Please call for details. 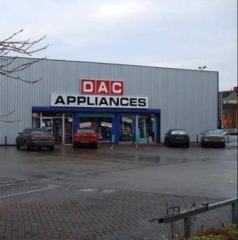