We are a Euronics Store based in Kelso in the Scottish Borders. We sell a variety of products including Electrical Appliances, Hardware, Kitchenware, Gifts, Fancy Goods etc.

James Stewart & Son are a family business, established on 5th July 1886 in Kelso in the heart of the Scottish Borders, by James Stewart. Originally trading as Tinsmiths, the trades of Ironmongers & Cycle Agents were added in the late 1800's when James's son Thomas joined the firm.

In 1933 Thomas Stewart’s son, James T Stewart, joined the business after completing his training in Edinburgh in the Ironmongery Trade, Electrical Engineering and Plumbing Science. The business now expanded to include Electrical Contracting and the sale of electrical appliances.

In January 1968, Kenneth Stewart, son of James T Stewart, joined the firm after completing a degree of BSc in Electrical Engineering at the Heriot Watt University. Kenneth is assisted in the running of the business by his two sons, David who joined in March 1995 after studying Building Services Engineering at Heriot Watt University and Ian who joined in October 2001 after completing a Degree in Business Studies at Napier University.

The company currently have one large shop with two electrical showrooms in Kelso and also Electrical Contracting departments in both Kelso and Melrose. We also have a large Domestic Appliance Repair Department covering all of the Scottish Borders and North Northumberland and a Renewables division that is MCS registered for Solar PV installations.

We deliver goods to all of the Scottish Borders and North Northumberland. Postcodes covered are TD1 - TD15 & NE66 to NE71. 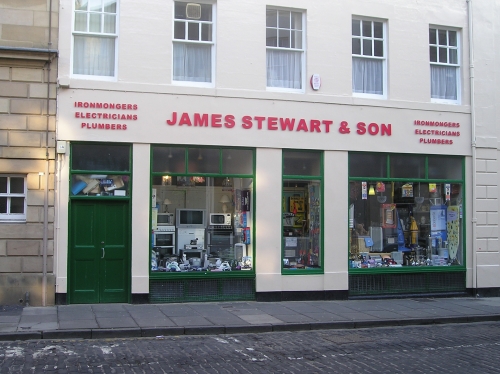