Welcome to Cliff Walton & Sons. We are a family run business and offer a wide range of products and services. LG Televisions can be viewed in our store, where we offer quality product and the latest 4K technology. These can be viewed online, but customers would benefit seeing the quality of picture for themselves, by coming into the store.

Cliff Walton & Sons was started in 1972, by Cliff Walton. Cliff was a qualified Electrical Engineer and previously served in the Irish Guards. He saw a niche for an electrical retail. Working from home he filled his house with television sets and would work all hours delivering and installing this luxury electrical item. He would also install pipeline aerials for rural farms, allowing farmers to have a television set. We still have customers today, who remember Cliff delivering their first television, especially when it went to colour. Before long, it was decided a shop and staff was required and Katrina joined the team. A small premise was in West Street Rhayader and Cliff Walton & Sons was started.

After a few years, a new larger premises was required. Cliff purchased Kimberley, an old cafe with accommodation above. Where he worked and introduced other household appliances to the local people of Rhayader. By this time, it was a family affair with his mum on sales, his wife keeping the books, and his two sons Christian and Justin joining the firm. Christian trained at Newtown College, in Electrical Engineering and Justin (or Joe as he known), is a people person and took to sales like a duck to water. Then when Chris and Joe were 17 and 15, Cliff and Pauline had another addition to the family and baby girl, Fleur: now a Chemical Engineer.

Sadly, Cliff passed away in 2001, leaving Cliff Walton & Sons in his wife and son’s capable hands. The business has gone from strength to strength and weathered trials and tribulations.

We're sure Cliff is looking down on his family and would feel very proud of their achievements.

From the East A44 Leominster/Hereford - from the A44 East Street, turn right at the clock tower and continue into North Street A470. Cliff Walton & Sons are located 50 yards on the left-hand side. Parking available after the traffic lights, on left, in Smithfield Cattle Market or alternatively turn right after the traffic lights, onto Council Car Park.

We can deliver to most addresses is the UK. 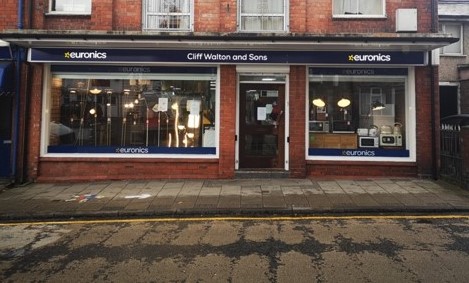